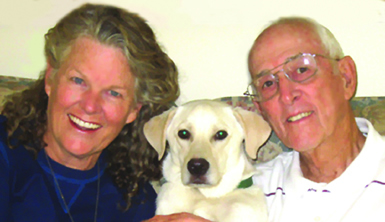 Jack Hartman & Judy Hartman have two passions…their love for Jesus Christ as their Lord and Savior and to reach out to the world and share His love and salvation through their ministry of writing and prayer.

Jack’s first book was written at a devastating financial time, in response to God’s call for his life. That topic on finances has led to his continued search through the Bible, by topic. He has written a total of thirty-three Bible-based topical books.

In the beginning, Jack and Judy gave books away to pastors and leaders in third world nations and to inmates in prisons and jails using their own funds.

In 1991, Jack and Judy realized that they actually had a ministry in which others might want to help their efforts. Lamplight Ministries, Inc. was established in 1991. It has grown both in number of books, and in reach nationally and globally. People whose lives are changed by God’s power through the gospel message and the Word of God in Jack and Judy’s books have opportunity to participate in providing funds for the publishing and distribution of these books and Bible studies. Now a new phase has begun to also distribute books through churches, bookstores, libraries in the United States. Proceeds from these sales will also help the global ministry to get books into the hands of pastors and leaders in Third World countries.

Jack and Judy plan to keep dividing the Word of God into bite-sized, easy-to-understand pieces to prepare hungry hearts ready for the answer: Jesus Christ. He is the answer to every question. Their goal is to draw every person on earth to know God through His Son, Jesus Christ, and to live in the power of the Holy Spirit.

Jack established Northeast Planning Associates in Manchester, NH in 1959 and continued as General Agent until his retirement in 2012.The firm continues to stand out as one of excellence as godly principles remain in operation. In his non-work hours, Jack has played over 7000 rounds of golf. He’s made six holes-in-one!

Judy taught elementary grades and remedial reading from kindergarten through high school for 13 years plus one year as principal of a small Christian school. She was a Co-founder of Ladder Creek Youth Ranch/Omega Ranch in Scott City, Kansas in 1970. She graduated from Crossroads Youth with a Mission in 1988.

Jack and Judy became Health Ministers with Hallelujah Acres in 1997 and 1998.

Six children, 11 grandchildren, and two great grandchildren bless Jack and Judy beyond measure! Nellie Mae, a cockapoo puppy, was added to their household in 2016.

Jack and Judy do not know what the word retirement means. They think it means re-fire to touch every life that you can with the love of God in Christ Jesus. Their desire is to reach every people group possible with a translation of their books which are a bridge for making the Bible simple and easy to understand. Their vision for Lamplight Ministries, Inc. is to bring the truth of Jesus Christ into every heart and then to see the Bible come alive in their hearts.

You have Successfully Subscribed!